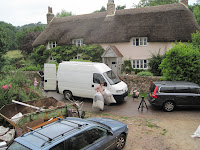 This month has seen the last of the windows fitted, and the Reuters TV crew spent a day at Luggs filming for their piece on sheepswool insulation. The cameraman can just be seen at the back of the van in the photo! Great fun was had by all, and the resulting few seconds of fame can be seen at http://www.reuters.com/news/video/storyvideoId=130693829&videoChannel=5VideoId=130693829&videoChannel=5 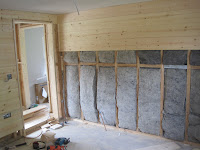 The insulation - largely local sheepswool - is now in place and plastering is well under way. The solid oak flooring is arriving next month, we're almost ready to order the kitchen, and we're finally starting the exciting process of choosing finishes!
Outside, somewhat later than planned, the groundworks are beginning. We've installed a new sewage treatment plant and rainwater drainage, as well as landscaping for the sitting area and garden. 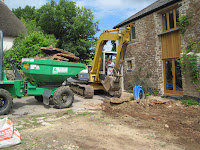 As we move into autumn, the decorating will begin in earnest and we'll be looking forward to gauging the reaction to the website when it goes live for the first time! We're already considering ways to mark the grand opening of Luggs Barn - more details next month!
Posted by Sarah Young at 07:46 No comments: